By NITIN PANGARKAR
After incurring hefty losses for more than a year, oBike ceased operations in Singapore on June 25. Though other players have exited the scene, oBike is the only member of the Big Three – Mobike and ofo are the other two – to have done so.
oBike’s exit raises several questions about the future of the sector and the possible strategies that players might adopt.

One question that arises is the feasibility of the bike-sharing business model in Singapore, especially after the impending implementation of new regulations, which will require them to be licensed by the Land Transport Authority and have their fleet size regulated by it, among other things. 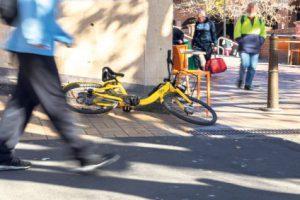 I believe that Singapore provides a conducive environment for bike-sharing companies for several reasons: The population density is high, income levels are high, but car-ownership is relatively low, the weather is generally favorable (e.g., no snow which would make bike-riding hazardous), and sidewalks are paved well and generally clear for safe bike-riding.

These factors probably attracted bike-sharing companies, and the fierce battle that has ensued has taken its toll on the profitability of the players.
The new regulations will certainly impose steep costs, especially because of the registration fees to be paid for each bike in the fleet and also the potential fines that may be incurred if the bikes litter the landscape.
But they may also be viewed as a blessing in disguise by the bike-sharing firms.
There are several reasons for this. Over the last few weeks, a few firms have already announced that they would discontinue operations because of the new regulations, thus potentially easing the downward pressure on prices.
Having fewer players may also mean that their fleets are utilised well, subject to factors such as pricing and the utility offered to customers.
In the past, because there were no registration charges, bike-sharing firms might have maintained larger than optimal fleet sizes, thus imposing higher costs on themselves – for bikes that were lying idle, for instance.
A smaller fleet size, combined with regulatory restrictions, will also allow better churn of bikes and a lower likelihood of vandalism to the bikes, since vehicles which are not sitting idle in the open for too long are less likely to be vandalized.
On the other hand, firms will have to come up with new technological solutions to prevent users from parking the bikes indiscriminately.
If they do not already have this technology, developing it will impose an additional cost. Fines may add up as well, and may be difficult to predict, especially in the early days of the new regulatory regime.
While the possibility of collecting data has been mentioned often in discussions about bike-sharing firms’ strategies, I believe the data is mostly useful for the companies to optimise their operations.
Occasionally, the data may be useful to other parties, such as telcos, which can use it to pinpoint gaps in their coverage, for example.
However, I cannot envisage a situation in which the data could be converted into significant revenue opportunities.
In future, there may be opportunities to generate additional revenues through advertising, but this opportunity will only manifest itself (if it exists at all) over time.
In other words, bike-sharing firms must find a way to recover most (if not all) of their costs through the prices they charge, at least in the near future.


They must do this while not impacting usage significantly, because the demand for the service is likely to be price-elastic.
From the user’s perspective, prices are likely to go up as the operators incur additional costs because of the new rules, and also since the firms would seek to build a buffer against potential fines.
Most importantly, if users are restricted in terms of parking, the utility of the service may go down—for instance, if the distance between the geo-fenced parking area and a user’s destination is significant.
In the past, one of the biggest conveniences of bike-sharing was that a user could park the bike anywhere.
On the other hand, users may not be required to pay a deposit to the bike-sharing companies, and thus need not worry about losing their deposits if the company folds.
The bike-sharing industry in Singapore may be considered akin to an experimental lab. Bike-sharing companies might discover technologies and business models that they may be able to transplant elsewhere in Asia.
Singapore’s regulators may arrive at an optimal regulatory regime after some trial and error, which may also be useful for other services that may arise in the future — PMD-sharing services, for one, which now exist in limited form.
The authorities are likely to want to encourage bike-sharing, but not while it imposes significant externalities, such as a littered landscape.
Users might do well to remember that the regulatory regime, as well as business models, might evolve, and yesterday’s policies and strategies may be very different in future.
Recent developments, and those to follow, will thus mean there are exciting and interesting times ahead for all stakeholders in this industry.
Tags: bike sharing