BY EVAN WILLIAMS
IMAGINE A FUTURE IN WHICH IT IS MORE convenient and less costly to own a subscription to a ride-share service not unlike Uber or Lyft to get around, rather than owning a car. No searching crowded parking lots for a space. No dealing with insurance companies, stopping for gas, or regular maintenance. Perhaps no human driver at all.
In this future of mobility, the city you live in provides on-demand access to autonomous vehicles that are seamlessly integrated into a complete system of transportation, one that is friendly to walking, biking, scooters and probably solar-powered golf carts, too. In other words, anything that lessens dependence on personal vehicles though does not preclude using them — perhaps just for pleasure, a ride behind the wheel of a genuine 20th or early 21st century antique.
Who knows how long it will take to get there or if the future will look quite like this? That depends in part on how quickly technology advances along with markets’ and governments’ ability to fold it in to traditional practices. But it is a future that Babcock Ranch planners have envisioned and that the city’s developer, Kitson & Partners, is reaching toward with its autonomous and electric vehicles, bike-share program and a “smart community app” that will help residents access transit services. 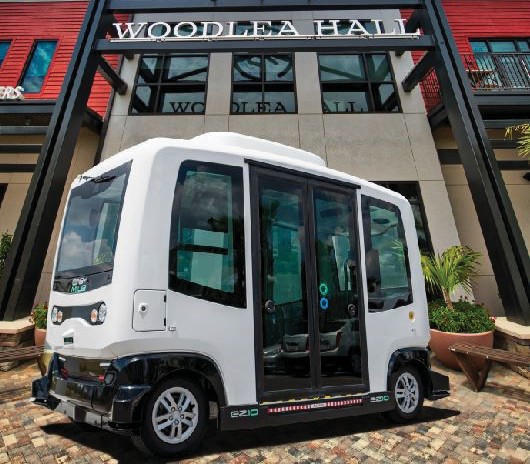 One of two autonomous shuttles at Babcock Ranch, built by EasyMile, that are used to carry potential homebuyers out to view model homes. COURTESY PHOTO

Babcock Ranch Transportation Services is beginning to build a transit system in this city that one day expects to hold some 50,000 people. The BRTS board is made up of two Kitson employees and two employees of Transdev, a transportation technology company that describes itself as the largest private provider of multiple modes of transport in North America.
“They’re really our operating partners when it comes to running a transit system,” said Tom Hoban, BRTS board member and Babcock Ranch president and CIO.
The BRTS board is keeping an open mind about any alternative modes of transportation that could play a role in an integrated system that helps reduce dependence on personal vehicles, Mr. Hoban said. The long-term vision, he added, is that BRTS “is truly a transportation service … That’s a bike share, a Zip car (an Avis car subscription service), autonomous vehicles, scooters, you name it.
“But it’s anything other than just jumping in your car and driving yourself.”
In the near term, he suggests, homeowners might be able to manage their needs with one vehicle instead of two and benefit from substantial savings on both cost and convenience as a result. In the long-term, they might not need to own car at all.
Early suggestions of what is to come are found within two autonomous shuttles at Babcock Ranch. Built by EasyMile, they are used to carry potential homebuyers out to view model homes. BRTS is looking toward expanding the use of autonomous vehicles to practical uses for residents.
“I think the point of moving from the marketing side of it to the real practical, on-demand use of it is a really critical step we’re taking right now,” Mr. Hoban said. “We’re really excited about it.”
Along with Transdev and Levatas, a tech company focused on software development, they are creating a comprehensive community app called Key- Link that will allow residents to hail a ride or have groceries delivered to their doorstep. Its numerous other features will include a virtual concierge. A group of Babcock Ranch residents are currently being recruited to help test the app’s transportation services before an initial version is released, possibly later this year.
A team of designers at Levatas created the look and practical features of the app, such as a feature that will allow residents to use systems such as Amazon Alexa or Google Home to hail a ride by voice command. At least in its initial phase, the technology is designed specifically to be used inside Babcock Ranch.
“(It) is a great area to roll it out because it’s a controlled environment with limited variables,” said Brian Dunnam, chief technology officer of Levatas.
Suggestions of what is to come are found in the town’s new paid bike-share program, one of the first of its kind in Southwest Florida (though it has long been in practice in Punta Gorda, West Palm Beach and Miami and other U.S. metropolitan areas).
And it is built into Babcock’s overall design, its bike lanes and pathways, if not yet its parking lots and the two-car garage designs on some of its single-family homes. Government rules and market needs still require certain provisions that might not be necessary in the future of mobility, which requires flexible planning. For instance, if customers are taking an autonomous shuttle to the grocery store, that store might not need four spaces per 1,000 (square feet). Maybe you only need one or two.
“It’s very early in this revolution of the transportation industry,” Mr. Hoban said. “But my point is you need multiple components growing in the same direction to really effectuate wholesale change…
“You try to plan with as much flexibility as you can to capitalize on the change that’s coming.”
Kitson & Partners is not original in this vision for transportation in coming years, although the company is unique in being able to incorporate it from the ground up in a city built from scratch. The ideas are found in decades-old mobility movements within the architectural and real-estate practices of New Urbanism, in the official state-adopted policy of roadway design called Complete Streets, and the increasingly trendy practice of transportation-oriented design — ideas that dovetail with the movement to “go green” and to embrace green technologies, to live healthier lifestyles, and with the environmental consciousness that has from the beginning been behind Syd Kitson’s vision for the town, with its large swaths of preserved land, “ranch-to-table” community garden and, of course, the vast solar field that supplies its power.
The town’s innovative approach to transportation might be considered by other cities and businesses in the future, said Greg Lindsay, director of applied research at the Montreal-based think tank NewCities Foundation.
“One future of mobility is you don’t own a vehicle,” he said. “Your employer has a fleet of shuttles. Or the mall does. Or your multi-family apartment building has a service.”
Or Babcock Ranch provides it, powered by its solar field.
“I think cities could learn from (Babcock Ranch) in the sense that they’re doing real-world testing,” Mr. Lindsay said.
Some of Babcock Ranch’s real estate development, built with this future of mobility in mind, could reflect what he calls “urbanized suburbs.” That is, areas that might not be near the downtown core of a city, but at the same time are not only the typical bedroom communities of “white picket fences and cul-de-sacs and two-car garages” that many envision when they hear that word.
Instead, they might be made up of mixed-use commercial and residential property that provides a more vibrant lifestyle or have easy walking and biking access to them, something Babcock strives to offer residents as it plans for an evolving world of transportation. ¦