By LIAM MORIARTY
Cleaner, Faster, Greener, and Cheaper: over the past century, fossil-fuel powered automobiles have become the default transportation mode across the industrialized world, impacting everything from patterns of land use to foreign policy.

And while the dominance of cars has certainly had beneficial effects, it’s also taken a heavy toll in pollution, resource consumption and a range of social and public health ills.
A recent report from the University of California Davis envisions a future in which how we get around each day becomes cleaner, faster, greener .. and cheaper by combining three emerging technologies.
The study suggests this sustainable transportation future will exist at the intersection of what lead author Lew Fulton calls three revolutions that are already underway. Number one, he says …

“Vehicle electrification. The second is automated vehicles leading in increments to a driverless car, and the third one is shared mobility, you don’t need to have your own car anymore.”

Fulton is with the Sustainable Transportation Energy Pathways program at UC Davis. He notes there are already about three million electric vehicles on the world’s roads. And last year, US sales of EVs shot up nearly 40 percent.
Study co-author Jacob Mason is with the non-profit Institute for Transportation and Development Policy. He says electric cars are a key part of the green transportation vision.

“Vehicle electrification significantly reduces local air pollution,” he says. “And if you couple that with sustainable electricity generation, then you can get rid of a lot of fossil fuel and greenhouse gas emissions.”

Lew Fulton says driverless cars – which just a few years ago seemed like science fiction – are definitely on the way.

“Technologically, it’s moved really quickly, and the cost of building these vehicles has come down a lot.”

Recently, Apple became the latest tech giant to follow Google, Tesla and Uber – as well as automakers including Ford, Honda and Volkswagen – in the race to perfect the autonomous vehicle. If successful, that could not only eliminate most car accidents; a system of wirelessly-connected autonomous cars could sharply reduce congestion by more efficiently managing traffic flow.
Then Fulton says, there’s that “shared mobility” business …

“It’s the idea that we would no longer own cars. We would simply hail them, call them, when we need them.” 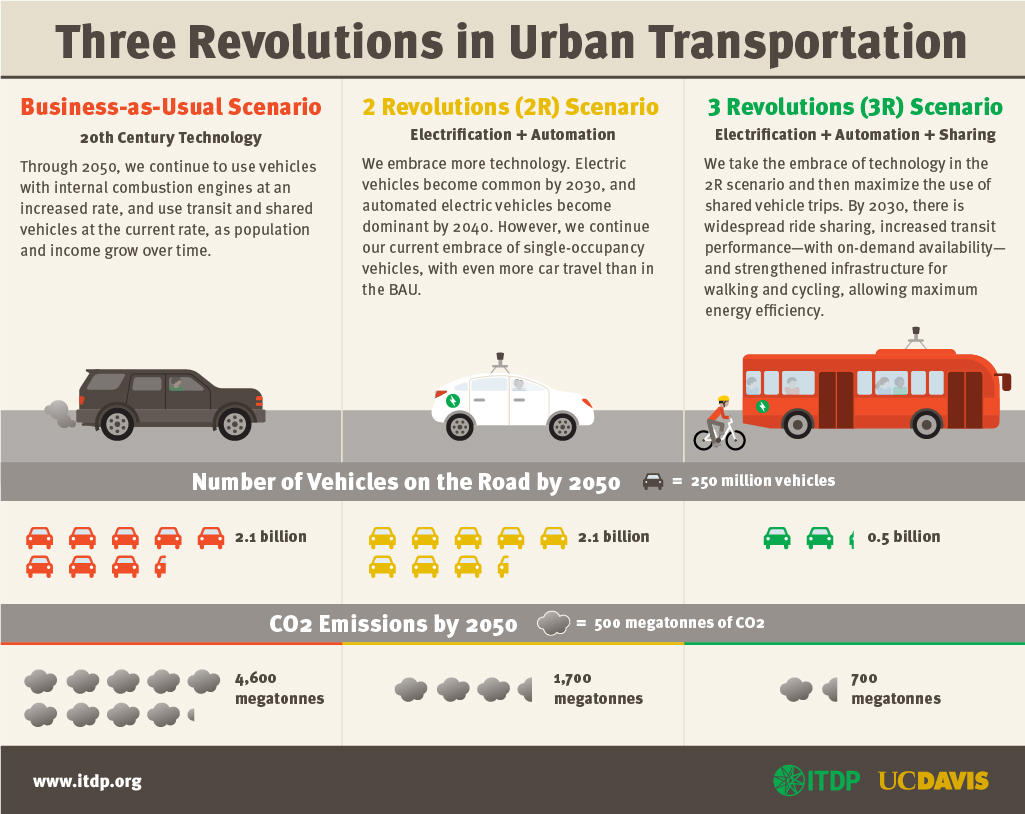 So when you weave these technologies together, you get something like this …
Every morning when you’re ready to go to work, you use a smartphone app to summon an electric-powered, driverless van. You and several other commuters from your neighborhood work on your laptops or browse the news on your tablets till you arrive at your office.
It’s like Uber with robots.
Compare that to the way we do things now. We pay tens of thousands of dollars for a car that sits parked most of the time, then pay hundreds more each month for insurance, maintenance, repair, gas, parking. Lew Fulton says that just won’t make sense any more.

“If instead of that model, we have a model where we’re paying a little more for each trip and we don’t have the expense of owning a car, it comes out much, much cheaper,” he says.

Jacob Mason says that shift could have profound implications for urban quality of life.

“Curbside parking, parking garages, parking lots … All of a sudden that space is … the need for it for parking is reduced and so that could become more public space, more housing, parks, what have you.”

Jeff Allen heads a Portland-based group called Forth. It’s a trade association and advocacy group to support electric vehicles and what’s called “advanced mobility.” Allen’s group is all on board with these three transportation revolutions.
But, like the authors of the UC Davis study, Allen knows the convergence of these technologies could have a dark side.

“Just because they’re disruptive doesn’t mean that they’re good,” he says. “They could be disruptive in ways that most of us wouldn’t like.”

For example, Allen says, new technologies tend to gravitate toward the markets that are most profitable. But many of these innovations would greatly benefit underserved communities, as well.

“Our job, then, is to figure out how do you point those technologies in the right direction socially? And then also, how do you hack them for the benefit of people who really need them?”

Study authors Lew Fulton and Jacob Mason readily admit there’s a slew of barriers to be overcome and unintended bad outcomes to be avoided in pursuit of this green transportation utopia.
But, they say, the potential is there, if we play our cards right, for these technologies to free up time, space and money to make getting around more efficient, more pleasant and way easier on the planet.