By Don Jergler
He calls himself “The Rideshare Guy” and he’s become one of the more prolific voices covering the still-burgeoning business.
When Uber and Lyft were at the point in development that they were considered by some to be just another fly-by-night constituent of the gig economy craze, Los Angeles-area engineer Harry Campbell started driving part‑time for both app-based firms and he also started a blog on ridesharing.
As a structural engineer working on fleetwide problems for Boeing Co.’s 757 aircraft, he was doing well for himself. But in a short amount of time, his ridesharing blog took off, so three years ago he quit his day job to focus on the blog full‑time.
The blog, which has everything from articles to podcasts to YouTube videos, currently reports 500,000 views a month.
Eventually, the blog launched a video training course to help educate rideshare drivers on subjects that range from getting started to how to make more money as a driver, and it also has a running list of insurance carriers that offer rideshare insurance.
The Rideshare Guy spoke with Insurance Journal on ridesharing matters that our readers may have an interest in. This has been edited for brevity and clarity.
Insurance Journal: Can you talk about how ridesharing has changed in the last two or three years?
The Rideshare Guy: One of the biggest changes we’ve seen in the past few years is that rideshare has become mainstream. I think that when you start to hear your parents and your grandparents talking about Uber and Lyft, you know that the companies have really made it.
When these services were first starting, it wasn’t a sure thing that they were going to take over like they have. Uber has grown into a worldwide brand. It’s become a service that’s extremely popular with drivers, with passengers, and consumers. That’s what we’ve seen, an explosive growth and probably not going to stop any time soon.
IJ: What some of the hot button issues in ridesharing today?
The Rideshare Guy: Coming from the perspective of a driver, one thing we’ve seen over the past three years is that rates have actually come down significantly. You probably notice this as a passenger consumer that taking an Uber around the city is now cheaper than ever. It’s up to 50 to 70 percent cheaper than a taxi in many large cities. That’s great for consumers and passengers, but definitely a downside for the drivers is that they’re obviously making less than ever.
We surveyed over 1,100 drivers earlier in the year. They reported making an average hourly earnings of $16. That’s actually before expenses. Drivers, since they’re independent contractors, they’re responsible for gas, and maintenance, and depreciation on their vehicle and even rideshare insurance. They have to cover all of those costs.
You can see that the trend is that the pay for these drivers is getting closer to more of a minimum wage or a service type job even though not everyone has that impression. 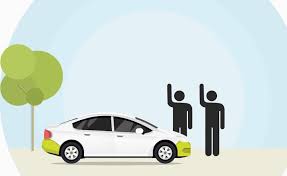 IJ: What would you tell our insurance professional listeners about ridesharing that they should know?
The Rideshare Guy: One of the shocking stats that I see is that most drivers don’t have rideshare insurance. We’ve surveyed our audience and seen, depending on the surveys we’ve done in the past, 60 to 80 percent of drivers don’t have rideshare insurance.
That provides for a big issue for drivers just because they receive coverage while they’re en route to a passenger or while they’re on a trip.
They actually don’t have coverage when they have the app on and they don’t have a passenger yet, when they’re waiting for a passenger. Personal insurance won’t cover that. Uber and Lyft only provide state minimum liability and no collision coverage.
That speaks to what we see with drivers in general. You have a lot of drivers that get into working for Uber and Lyft, just looking to make a few hundred bucks a week. They’re just looking to do a side hustle. They’re looking to make some part‑time cash.
Of course, you also have full‑time drivers. But I think a majority of drivers are doing about 10 to 15 hours a week or less.
You have a lot of people who aren’t aware that they might even need rideshare insurance. They aren’t aware of the reporting and the tax requirements. There’s a big education component.
IJ: How can insurance agents approach drivers to educate them and even drum up a little business?
The Rideshare Guy: If you listen to that stat that a majority of drivers don’t have rideshare insurance, a lot of agents have seen that as a pretty big opportunity.
For insurance agents that are out there listening, I think that there’s actually some pretty easy steps that you can take. The most obvious would be when you’re in an Uber and Lyft, talking to drivers, asking them about their insurance situation, and just helping them understand and educate them as opposed to selling them on the rideshare insurance.
We get lots of emails from drivers who get into accidents and don’t realize that Lyft had a $2,500 collision deductible. If you’re a State Farm agent for example, State Farm actually provides rideshare insurance that will cover you even if you’re on a trip. You won’t ever have to worry about Lyft’s collision deductible. That education component is definitely important, taking rides with drivers.
But also going to the places where drivers hang out. This could be airport lots. Drivers have to sit in a queue waiting for rides at the airport. There might be 50 to 100 drivers sitting there for up to an hour that are very bored and very attentive.
Then, there’s also places like after a sporting event. I’m here in Los Angeles. Towards the end of Dodger games and Rams football, there are hundreds of drivers out there waiting for the game to end so that passengers can come out. They can get their ride. There’re definitely places if you go out there and do a little looking.