Four reasons to use a carshare for your teen

According to a new research report by the market research and strategy consulting firm, Global Market Insights, Inc, the Intelligent Transportation System (ITS) Market worth over $34bn by 2025. ITS market growth is attributed to the increasing emphasis on smart city & smart transportation development initiatives by government agencies, aggressive R&D in autonomous vehicle technology, and rapidly increasing vehicle production demanding effective traffic management solutions. Also, government agencies around the world are establishing strict norms for controlling vehicle emissions and improving roadside safety. Such initiatives are promoting market players to develop advanced ITSs for a diverse range of transportation modes such as roadways, railways, airways, and maritime.
Intelligent Transportation System (ITS) Market 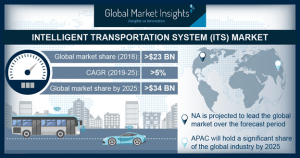 Roadways held a majority share of the intelligent transportation systems (ITS) market due to the extensive amount of consistent traffic movement on roadways demanding innovative traffic management methodologies. An exponential rise in the number of road accidents around the world is a growing concern for government agencies. According to the International Transport Forum’s Road Safety Annual Report, 2017, road fatalities in the U.S. increased by 6.3% between 2010 and 2016. According to the Annual Accident Report, 2017, by the European Union (EU), road traffic accidents in the EU member states claimed 26,100 lives and left over 1.4 million people injured in 2015. Therefore, government agencies are taking strong measures to deploy ITS networks across major roadways to reduce road accidents and improve roadside safety.
In the roadways intelligent transportation systems market, Advanced Traffic Management Systems (ATMS) held a majority share of over 34% in 2018 due to the growing demand for reducing traffic congestion in urban areas by enhancing an effective utilization of the prevailing infrastructure. These systems acquire real-time information from roadside traffic sensors and aid in developing effective traffic management strategies. Also, the development of adaptive traffic control solutions is improving the efficiency of these systems leading to the growing adoption of ATMS around the world.
In terms of applications, the traffic management application is expected to hold a major share of over 20% in the roadways ITS market by 2025. Reduced traffic congestion results in effective control of vehicle emissions and better estimation of travel times. To improve the overall efficiency of traffic networks and commercial travel operations, such as fleet management on roadways, ITSs are expected to play a critical role over the forecast timeline.
Rail traffic management solutions dominated the railway ITS market in 2018 due to the growing emphasis on optimizing rail movement of international trade routes as well as increasing focus on enhancing railway safety infrastructure. The major features of railway traffic management systems include real-time traffic planning, route scheduling, power supply & infrastructure, operation information for passengers & the staff, and maintenance support. These solutions automatically control and set routes for trains and establish route control in events operational disruption.
Operation and collision avoidance application is projected to hold a dominant share of over 30% in the railway intelligent transportation systems market by 2025. Taking precautionary measures to prevent collisions can aid in mitigating the risk of jumping signals and over-speeding by loco pilots of trains that may lead to accidents. Passenger and freight collisions result in huge economic losses and fatalities every year. Most incidents happen due to human errors. By deploying automated collision avoidance technologies, such incidents can be effectively avoided saving numerous lives.
In the airways intelligent transportation systems (ITS) market, communication and networking systems are projected to exhibit excellent growth between 2019 and 2025 at a CAGR of over 7%. With increasing air traffic levels and rising demand from passengers for in-flight communication systems such as Wi-Fi access, airlines are exploring innovative methodologies for improving communication and the network infrastructure. With companies investing heavily in improving network connectivity with airborne aircraft, avoiding congestion is becoming much easier with the use of modern communication and networking systems.
In maritime ITS, the weather information market is expected to register accelerated growth over the forecast timeline. Good weather forecasting helps ships and their crew with effective navigation and taking informed decisions to reduce risks due to unexpected weather shifts. A bad weather can cause maritime vessels to run aground, capsize, or to collide with other ships and objects. Efficient weather information and forecasting measures ensure that such mishaps are prevented by taking timely precautionary measures.
The Asia Pacific region is projected to hold the second largest share of the global ITS market over the forecast period. Major economies in the region, such as China, Japan, and India, are investing significantly in creating megacities and modernizing their transportation networks to facilitate enhanced trade exchanges. Also, government initiatives in the region for issuing stringent emission norms to combat rising levels of air pollution are expected to contribute to market growth over the forecast timeline.
Companies operating in the intelligent transportation systems market are engaged in leveraging smart, digitalization technologies to enable transportation system operators to achieve the flexibility, reliability, and availability that they require for making transportation networks cost-efficient. Also, these companies are focusing on large-scale ITS deployments in collaboration with government and municipal authorities to improve roadside safety and traffic management systems. For instance, in December 2018, Siemens Mobility was awarded a USD 573 million contract to design the next-generation of VIA Rail Canada’s trainsets. These trainsets are expected to enhance the passenger experience while enabling the highest level of safety.
Some of the key vendors operating in the ITS market include Advantech Co., Ltd., Bestmile SA, Clever Devices Ltd., Denso Corporation, EFKON AG, ETA Transit Systems, GMV Group, Hitachi, Ltd., Kapsch Trafficcom, Lanner Electronics, Moxa Inc., Nuance Communications, PTV Group, Q-Free ASA, Rhythm Engineering, Telegroup, Thales Group, TomTom N.V., Transmax Pty Ltd., Trapeze Group, WS Atkins PLC, and Xerox Corporation.
Source: https://www.gminsights.com/industry-analysis/intelligent-transportation-system-ITS-market