No one could argue that Car2go CEO Olivier Reppert didn’t have some skin in the game during the Chicago launch of the point-to-point car-sharing service this morning in Pioneer Court.
He stood motionless in the downtown plaza in front of one of the company’s pint-sized Smart cars while young people from the Jesse White Tumblers gymnastics crew bounced off a trampoline, soared through the air Superman-style, and somersaulted over the vehicle and his head.

After surviving the stunt apparently concussion-free, Reppert addressed the crowd, noting that the location was an appropriate setting for “pioneering” the technology in Chicago.
Point-to-point allows members to check out a vehicle and end their trip at any legal curbside parking space, which makes it handy for errands and traveling the first or last mile to or from a transit station. While it has existed in peer U.S. cities for several years, Chicago’s much-hated parking meter contract complicated the process of bringing the technology to town.
A backlash from local car owners and their aldermen who feared that the service would gobble up parking spaces for private vehicles also put a crimp in the plans to test Car2go in Chicago. While the original ordinance for the eight-month pilot, introduced by near-northwest side alderman Joe Moreno, outlined a service area stretching from Foster to 63rd, several aldermen opted out of the pilot.
As a result, the “Home Zone” goes no further south than Cermak, excluding virtually the entire south side, and there’s a major crater in the coverage area on the near-north side, since Lakeview and Lincoln Park aldermen Tom Tunney and Michele Smith refused to participate. 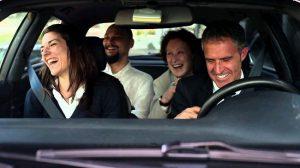 Burnett noted that the Car2go pilot is creating jobs, and it should have a positive effect on traffic congestion and air quality. He added that, since the company is owned by Daimler-Chrysler, Car2go members will be also be able to rent snazzy Mercedes sedans and SUVs in addition to the minimalists Smart Cars.Still, at the ribbon cutting, near-west alderman Walter Burnett, chair of the city’s pedestrian and traffic safety committee, told the audience he’s jazzed about the new service.
Alderman Brian Hopkins, whose ward includes parts of the near-north and northwest sides, noted that while the pilot is an experiment, so was America’s postwar effort to switch to a transportation system with near-universal universal private car ownership. “It didn’t work, and I think we can now declare that that experiment was a failure,” he said.
Hopkins added that contrary to fears about Car2go creating a parking crunch, a 2016 UC Berkeley study of some 10,000 Car2go members found that each shared car took up to 11 private vehicles off the road.
Afterwards Burnett told me that he feels the elimination of the heavily African-American south side from the Car2go pilot was inequitable, but he’s optimistic that after the pilot proves successful, his south side colleagues will be interested in bringing the cars to their wards.
Likewise, Hopkins said that while the limited service area makes the service less useful, he thinks that fears about parking will subside after Chicagoans better understand how the technology works.
Car2go business development manager Mike DeBonville, who’s overseeing the Chicago launch, conceded that the heavily gerrymandered Home Zone will make the cars less convenient to use.
“What makes for a successful location is really having a contiguous, open, home area where people can begin and end their trips anywhere,” he said. “When you have holes, it really adds to the complexity and doesn’t make it as convenient as it could be.”
Car2go will be deploying 400 vehicles during the Chicago pilot, including roughly 200 Smart cars, 120 sedans, and 80 SUVs. About 150 cars are currently on the streets. The Smart cars rent for 29 cents a minute, $7 for a half hour, and $15 an hour, while the Mercedes vehicles cost 39 cents a minute, $10 for a half hour, and $19 an hour.
Chicagoans can register for free by using the code CHI2018. Resident who register though August 23 will also receive $15 in car2go credit. After that date there’s a one-time $5 sign up cost, in addition to  the usage fees.