As the summer season winds down in the Roaring Fork Valley, the executive director of the country’s first free bike-sharing system is taking stock in the success of the program.

WE-cycle ridership has grown significantly over past year — from 2,786 users to just over 5,000 riders. And those bicyclists took more than 50,000 rides this season, according to WE-cycle Executive Director Mirte Mallory.

This is the first year that the bike-sharing program is free. Riders can take a bike from any of the 47 stations located in Aspen or Basalt for 30 minutes for free. Every additional minute is $.50 cents.

One of the biggest trends that emerged this year is that people used the bikes as part of their daily commute to work. 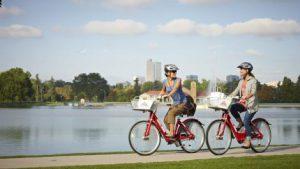 In Basalt, there was a surge in the number of people who took the bikes stationed in neighborhoods and rode them to park-and-ride lots in the morning and then back home in the evening, Mallory said.

“(Our goal is to) pre-empt the car trip at the beginning and provide that hub and spoke solution,” she said.

The average time a rider used a bike in Aspen was 10 minutes and eight in Basalt.

“People are riding more frequently but riding less,” Mallory said, adding 97 percent of riders used the bikes for under 30 minutes this season.

She noted that there was a spike in ridership during the lunch hour in Aspen, with users taking bikes to restaurants and doing errands.

Top riders have already ridden 300 times this season and are using WE-cycle two or three times every day.

Cristal Logan, vice president and director of Aspen Community Programs at the Aspen Institute, relies on WE-cycle when she commutes from her home in Basalt to her office. She also uses it to do errands in town.

“When I do use the bus I love WE-cycle to get to the Paepcke building (on the Institute campus),” she said. “I would say WE-cycle is critical to getting to our buildings.”

Logan added that the Institute has encouraged its visitors and scholars to use the bike-sharing program to get around town.

“It’s amazing to see how much we can influence people who don’t live here,” she said.

Mallory said the nonprofit had to respond quickly to the growth in ridership. She added staff to “balance” the number of bikes at each station every day.

She estimated that the balancers moved about 100 bikes a day to ensure there were enough docked at all the locations.

Another trend that emerged was riders didn’t necessarily want to do the heavy lifting by taking them to a station that involved going uphill.

To combat that, WE-cycle rolled out “rider challenges” so that if a user took five bikes back to a particular location they would receive a free cookie and espresso at Paradise Bakery.

A new challenge has been launched in conjunction with Adidas TERREX. It challenges riders to bike to uphill locations, and encourages usage in different ways. At the end of the season, winners will be awarded with clothing provided by the athletic company.

WE-cycle also has introduced on its website a valley-wide station planning map in which users can suggest specific locations, or support a suggestion. 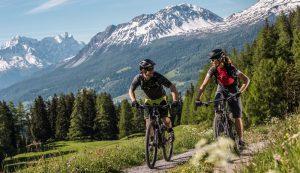 “We are eager to hear where bike share can serve you,” Mallory said. “We’ll use it as a planning tool for regional bike sharing.”

If voters approve a 2.65 mill levy in all eight jurisdictions in the Roaring Fork Transportation Authority’s service area this fall, it will fund WE-cycle in Carbondale and Glenwood Springs in the coming years.

WE-cycle is one of the feeder services included in RFTA’s 20-year plan and is a central part of helping people use alternative transportation, Mallory said.

WE-cycle is partly funded by local governments, so securing multi-year commitments has allowed Mallory to offer the service for free.

The Elected Officials Transportation Committee, which is comprised of the city, Pitkin County and Snowmass Village, committed $100,000 this year and in 2019. The Roaring Fork Transportation Authority also is kicking in $100,000 annually for three years. The city of Aspen upped its contribution to $145,000 this year, and the town of Basalt and Eagle County each contributed $45,000.

Mallory said this summer’s usage reiterates the notion that when bike sharing is free, simple and easy, people will use it.