The race for pole-position in the ride-sharing market

By Julie Carr Smyth, The Associated Press
Ohio’s capital city unveiled the first version of a pioneering transportation operating system on Thursday that will bring online its smart city transportation network.
Columbus beat out six other cities in 2016 to win the U.S. Department of Transportation’s Smart City Challenge. It received a $40 million federal grant, plus $10 million from billionaire investor Paul Allen’s Vulcan Inc., to implement data-driven ideas that make transportation safer, easier and more reliable.
Democratic Mayor Andrew Ginther said, “Today’s initial launch of the Smart Columbus Operating System is a major milestone in our smart city journey, as we are now better able to analyze, interpret and share data that will help us solve critical challenges and inspire innovation.”
The city’s Smart Columbus team said the operating platform is the first of its kind nationally. It will gather, aggregate and share data on how and why people are moving in and around Columbus, with the goal of making life run more smoothly.

The information that’s collected will allow both the public and private sectors to integrate transportation technologies, such as self-driving cars, connected vehicles and smart sensors into the city’s transportation network. More robust mobility data could help get excess groceries to food banks faster or warn drivers of oversized trucks of low bridges to avoid collisions. 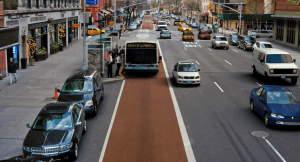 Ginther said the end goal is to improve lives.
“Fundamental to ‘becoming smart’ as a city is discovering how to use data to improve city services and quality life for residents,” he said. “When we apply data to the challenges we experience as a city, we can transform outcomes in education, employment, healthcare and even access to healthy food.”
Developers said the operating system will serve as the “technical backbone” for eight technology demonstration projects supported by the Transportation Department grant. Columbus won its spot as the testing ground over San Francisco; Pittsburgh; Denver; Portland, Oregon; Austin, Texas; and Kansas City, Missouri.
In its initial state, the operating system will publish 1,100 data feeds, curated by the Smart Columbus staff, around six wide-ranging mobility-related challenges.
The announcements came amid efforts by Republican Ohio Gov. John Kasich to advance smart transportation technology statewide.
Kasich signed an executive order last week authorizing autonomous vehicle research to take place on all public roads across the state. The order laid out safety parameters for such projects and creates a voluntary pilot program linking local governments to participating companies.
The order extended Kasich’s efforts to make Ohio a hub of smart vehicle research and development.