InDaily can reveal that Singaporean company oBike has removed most of its distinctive, grey-and-yellow hire bicycles from the CBD and North Adelaide after failed to renew its City of Adelaide permit in March.
The Adelaide City Council wrote to oBike this morning, following an inquiry from InDailyyesterday, ordering the company to cease operating as a business within its boundaries and to remove all remaining bicycles from the council’s roads within a week.
The company insists it is yet to decide whether to leave the Adelaide market, but the council says its permit has expired and that oBike has fewer than 10 bicycles left in Adelaide.
“As of today, there are less than 10 oBikes positioned within the Council area, so we believe the company has ceased operating in the City of Adelaide,” a council spokesperson told InDaily this morning.
Competitor ofo has been lobbying the South Australian Government for dedicated bikeshare spaces at train, tram and bus stations, positioning itself as a new, private element of the state’s public transport network.
It has also been lobbying local councils for permission to operate in an expanding area across the state.
OBike’s exit would effectively give ofo a monopoly on the nascent transport mode in Adelaide.
The companies offer GPS-tracked bicycles, which users find using a mobile app, hire at low cost and leave at their destination for the next commuter to use.
The city council has threatened to dispose of oBike’s remaining bicycles if the company fails to remove them.
“Today we have written to oBike to officially state that it must cease operating as a business within the City of Adelaide and to remove any bicycles from council’s roads within a week,” a spokesperson for the council told InDaily this morning.
“In the event that any bicycles are not removed within the specified timeframe, our community safety officers will take action to remove and impound the bicycles and arrange for their appropriate disposal, with any costs being charged to oBike.
“Ofo did renew their permit and continue to operate within permit conditions.”
But an oBike spokesperson told InDaily this afternoon that the company had yet to decide if it was leaving Adelaide, and that: “we are in the preparation stage to fulfill the new permit requirement, i.e. simcard GPS tracking system, and it might take some time”.
Both ofo and oBike started out with 50 bikes when they launched in Adelaide in October last year.
Ofo currently has 200 bikes on the streets of the CBD and North Adelaide “with room to increase”, a spokesperson for the company said. 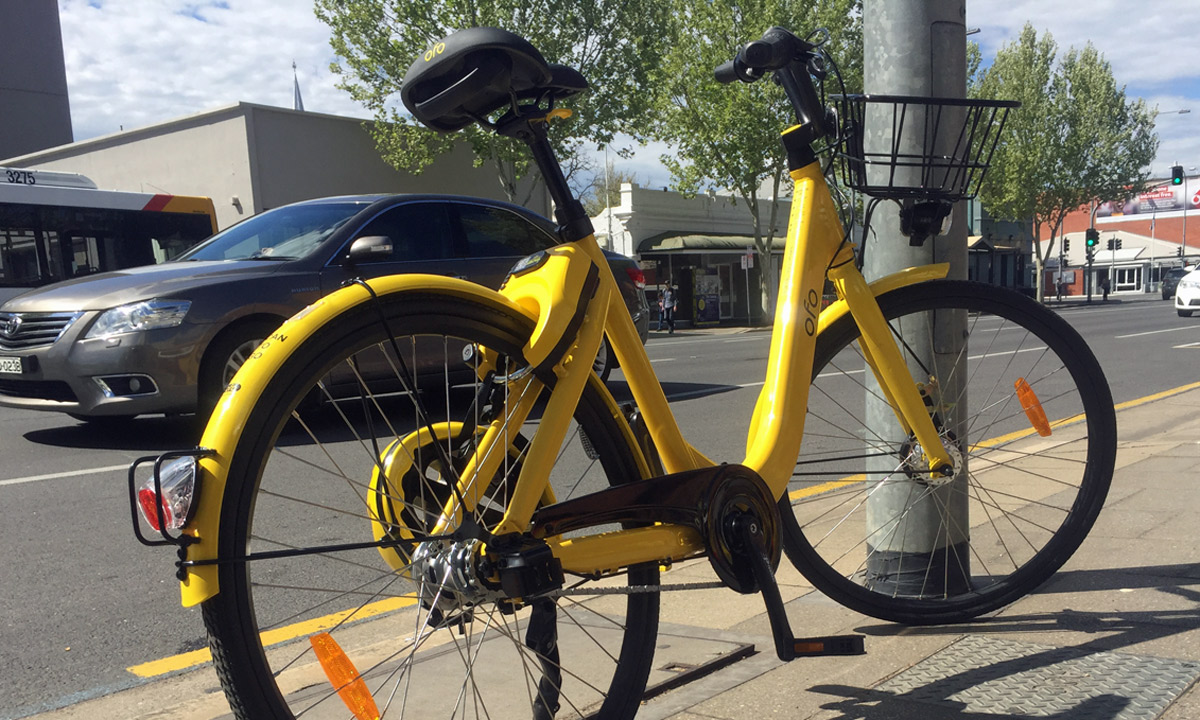 The number of bicycles allowed in the council’s jurisdiction may be altered, with approval from council staff, in response to changes in demand.
Ofo general manager for Australia, New Zealand and India Dexter Sim told InDaily this afternoon that: “We look forward to continued discussion with the local councils in Adelaide about how we can serve the local community with operational excellence.”
“Our aim is to provide a solution for the last mile commute,and provide a healthy and environmentally friendly way for commuters, families and tourists to travel around the city of Adelaide.”

According to a report in The Advertiser, oBike failed to submit comprehensive monthly reports to the council about the performance of its service earlier this year.
The now-massive global bikeshare industry – which began with a small bikeshare operation at Peking University in 2014 – took a significant hit to its reputation when images of huge piles of abandoned and vandalised, branded bikeshare bikes emerged out of China last year.
The industry also suffered a public relations blow in Australia last year when dozens of oBikes were scooped up from the Yarra River in Melbourne – and some people sought creative ways to dump the bikes, including in trees and on street signs.