Can Boston solve its traffic problems through crowdsourcing?

By Miranda Fulmore
Indiana State University is launching a new bike-share program that’s powered, in part, by the sun.
ISU purchased around 130 bicycles from the San Francisco-based company Spin. People can rent a bike for 50 cents every half hour by using a phone app.
Sustainability Coordinator Nick McCreary says what makes the ISU bike share different is the bikes don’t have to be returned to a charging station.
Instead, instead solar panels in the bikes’ baskets power the GPS.
“These can be parked and picked up anywhere because the lock is built into the back of it,” McCreary says.
“Basically all you do is you download the spin app and you put your information in and then you scan the back of the bike, it’ll unlock, then you ride.
And then you lock it when you’re done.”
McCreary says he wants to get more students active.
“Students might think a five minute walk is too far but a one minute bike ride isn’t, so hopefully it’ll spread students out and get them to drive less,” he says.
The bikes can only be used on campus. McCreary says they’re working with the city of Terre Haute to expand the program city wide. 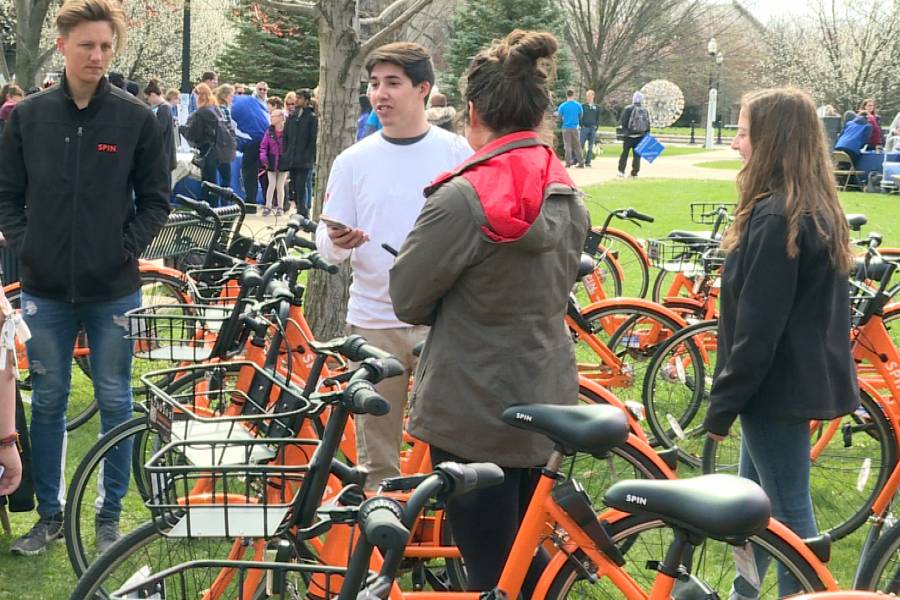 For now, the ISU bikes can only be used on campus (Zach Herndon, WFIU/WTIU News)