BY BRIAN SPAEN
Just six months ago, Bird created an electric scooter sharing program in Los Angeles, California. It’s received a $100 million raise as investors believe it can become the biggest player in the industry. With the money, the last-mile service plans to launch in 50 new cities by the end of the year.
New Series B funding took place less than a month after receiving $15 million in the middle of February. It’s grown incredibly popular over the past half-year in Los Angeles due to the ease of picking up and using the dockless e-scooters. Over in China, the scooter’s established growth has created more sustainable transportation.
“I think it speaks to how big of a vision this is, to use short-range electric vehicles and electric-scooter sharing to replace a lot of car usage,” Travis VanderZanden, CEO and founder of Bird, told the Financial Times. “It’s a huge opportunity to have a big impact on the world.”
Investors are hailing Bird to be “the next Uber” in ridesharing, though the structure of the business between the two are quite different. However, Uber had just a fraction of what Bird made in their Series B funding, which was $32 million in 2011. It also happened 18 months into their lifespan, a year further along than Bird. 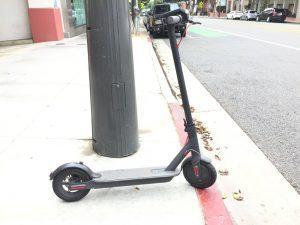 The process of using an electric scooter through Bird is pretty simple. Using their mobile app, one can be traced and reserved.
Then, a detailed description on how to safely ride the e-scooter to a specified destination spans across multiple screens.
In the evening hours, various Birds laying around are picked up and moved to a storefront that accepts hosting them.
An issue of following basic traffic laws in California has cropped up during its short run. While Bird says they don’t have control over it, the City of Santa Monica believes they shouldn’t be able to ignore laws such as not wearing a helmet and having a license for a motorized scooter.
Despite potential for the city to limit the service, these issues haven’t stopped a massive amount of funding on the project.
On the positive side, Bird provides an environmentally friendly last-mile service. Unlike Uber and traditional vehicles, these scooters don’t give off any carbon emissions.
They’re also very beneficial to urban areas that want to decrease the amount of vehicles on the road and university campuses that are spaced out.
Bird joins various other electric scooter and bike sharing startups that are looking to cash in on the trend. However, they may have a leg-up on the competition with how cheap it costs to use the e-scooters ($1 per ride and $0.15 per minute) and the massive funding they received.
They’re looking to expand to over 50 cities by the end of the year. Most of their targets will be in the US, but they will be looking toward other places around the world as well.
Tags: Ride Sharing