Are e-scooters the future for commuters?

By Kamrul Hasan
The advent and success of app-based transportation alternatives to CNG auto-rickshaws and taxis in Dhaka have sent the latter groups in frenzy. Ride-sharing apps like Pathao and Uber have proven to be cheaper, user-friendly, and above all, convenient, unlike CNGs and taxis which rarely charge according to the meter or seldom agree to take a passenger on a ride.
Uber has already faced stiff criticism and outright protest in many countries from taxi drivers who claim the ride-sharing app is not a platform connecting rider and driver, but a global taxi company instead. But Uber owns no vehicles or employs drivers; the company argues all drivers have their own cars, self-employed, and work with Uber on a contractual basis.
CNG auto-rickshaws and taxis are commercial entities, and are thus subject to commercial tax. On the other hand, the vehicles enlisted on ride-sharing apps are personal vehicles and thus protected from commercial regulations.
Immediately after Uber’s launch a year ago, the Roads, Transport and Bridges Minister Obaidul Quader praised the initiative. But the next day, the Bangladesh Road Transport Authority (BRTA) said it did not have any permits to operate. A series of dramatic twists and turns followed where the government on one hand praised the tech-based initiative – which is in tune with the vision of Digital Bangladesh – and on the other hand call it illegal because of the lack of government approval.

But are ride-sharing platforms illegal?

Herein lies the catch, Uber, Pathao, etc are a modern-day innovation born out of ingenuity to combat the existing difficulty of commuting in urban areas. The concept of a platform which helps a private car owner connect to a commuter and establish a working relationship was not conceivable when the BRTA drafted the road transports guideline. It only extended to private vehicles and commercial vehicles. A platform which facilitated usage of private vehicles for commercial purposes was beyond anyone’s imagination.
Uber and Pathao skirt the guidelines. They have been developed outside the existing parameters, not in violation of it. This has prompted BRTA to call Uber and Pathao illegal, but after the overwhelming response to the ride-sharing apps and much discussion, met with the representatives to discuss a guideline to take into account the concept of ride-sharing.
To sum up, ride-sharing apps are perfectly legal, but use of personal vehicles for commercial use? Not so much. But things are changing with the government drafting new guidelines to adapt to the current setting.

Uber appeared as a car-sharing service and Pathao provided motorcycles. Recently Uber has introduced UberMoto – motorcycle-based ride-sharing – and Pathao has introduced Pathao Cars.
Bahon, Ezzyr, Amarbike, Chalo, SAM – Share A Motorcycle, all offer a diverse array of services to commuters. Greater competition leads to greater innovation, lower prices, and all-around benefits for commuters and the industry.
The CNG auto-rickshaws and taxis have enjoyed a monopoly for years. The rapid popularity of ride-sharing apps has effectively thrown the outdated industry off-balance. In response, CNG auto-rickshaw and taxi drivers and owners have taken to calling the ride-sharing apps “unfair competition.”

Hazrat Ali is a 45-year-old CNG auto-rickshaw driver. He claimed ride-sharing is cheaper because of the absence of commercial tax. He claimed the high commercial taxes on his vehicle and others have made operations costly.
But taxes are not the only concern for CNG auto-rickshaw drivers. They have a daily amount to pay to the owner which has to be met no matter what. The amount, despite being determined by the government, is often doubled or tripled, forcing CNG auto-rickshaws to charge the exorbitant fares.
Dhaka Metropolitan CNG Owners Association President Barkatullah Bulu said they also want to be a part of mobile application-based services. He said CNG auto-rickshaw owners are waiting to analyze the new policy on ride-sharing which is yet to be announced.
Bulu imagines the apps will allow CNGs to be tracked easily, which will also cut down the risk of hijacking on the vehicle. He hinted at the app offering insurance as well as several other security features.
The CNG Drivers Union, on the other hand, say they find it irrational that they were not included in ride-sharing platforms like Uber.
Dhaka District CNG Auto-rickshaw Workers’ Oikkya Parishad Secretary General Shakhawat Hossain Dulal claimed ride-sharing apps are unfair because not everyone can use smart phones.
He said: “If CNG drivers were trained, they too could have taken part. Excluding them is a gross exploitation of their economic potential.”
Rafiqul Islam is an Uber driver living in Uttara. He returned from Kuwait earlier this year, and took up driving for Uber when he found no other suitable employment. He uses his car to provide rides to commuters in need, and only occasionally rejects rides if he is running low on fuel.
He calls Uber a blessing and is thankful for the opportunity.
The popularity of shared motorcycles is mostly due to their navigability in the gridlocked roads of Dhaka. With time being of the essence, motorcycles are the preferred mode of transport in a hurry. But when comfort is preferred, shared cars win out. 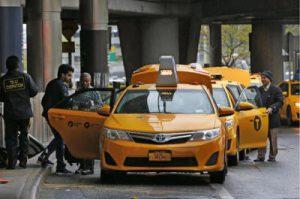 According to a report by Uber, a private car remains unutilized 96% of the time. On average, 1.14 people occupy a private car. The report claimed a shared car was able to displace 9-13 cars on a daily basis.
Furthermore, Uber claimed they received over 1.5 million requests from passengers in Dhaka over the past one year. And 200,000 of them were in November alone. The report also says around 9,500 drivers make daily trips in Dhaka, and around 100 new drivers sign up with Uber every day.

In spite of its success and popularity, Uber did not disclose its earnings over the year. Arpit Mundra, general manager of Uber Kolkata and Uber Dhaka, said they are working with the government to sort out the legal issues.
Pathao responded to the Dhaka Tribune’s queries over an email, saying it is merely a platform that allows commuters to connect to riders. They denied being a service.
According to Pathao, around 1,000 people take Pathao Car rides on a daily basis, but did not disclose the daily Pathao bike ride tally. Pathao has around 50,000 users, according to Google Play Store.
Pathao authorities also said they are working with the government to bring their operations under a clearly defined legal framework.
SAM – Share A Motorcycle and Hello CNG are currently working to include CNG in their apps.
Imtiaz Kashem, founder of SAM and managing director of Datavoxcel Ltd, is the first to design the concept of sharing motorcycle rides in Bangladesh. He said that CNGs could have been integrated in their apps, but CNG owners were not available to layout the plans and discuss terms. He also said if need be, his company would train CNG drivers.
On the topic of unfair competition, he said there is a tax imposed on the vehicle and another on a person’s income and that is all there is to it.

Centre for Policy Dialogue Research Fellow Towfiqul Islam Khan said there are three aspects to consider the tax and unfair competition issues – registration, income tax and route fees.
Fakhrul Islam Patwary, a chartered accountant, said taxation depends on the purpose of the vehicle. If the vehicle is used for commercial purposes, the company has to pay income tax. But if a company shows there are lesser number of vehicles registered with them, it will be able to avoid paying taxes. He urged the government to ensure the companies were providing accurate numbers of their registered vehicles.
BRTA Chairman Md Moshiar Rahman said they are currently finalising the policy on a priority basis. He said all debates will be put to rest after the policy has been formulated.