It has long been agreed that a “sharing economy” will be a growing living model adopted in many sectors, and, in Italy, this model is indicative of a large-scale change in lifestyle. Growing numbers of Italians are rejecting the car ownership model and embracing car sharing instead, making the country the second largest users of car share schemes in Europe (after Germany), according to a recent study by Frost & Sullivan.

Mobility habits in Italy are changing rapidly. A change in attitude and the high population density in cities are the main reasons for this rapid growth in car sharing.

According to the Ministry of the Environment’s first report on sharing mobility in Italy, car sharing services are operational in 29 cities— a figure only set to increase as 43 Italian cities have more than 100,000 inhabitants, 10 of which exceed 300,000.

In these cities car-sharing is booming, with nearly 2,000 vehicles and 370,000 subscribers Milan alone and car sharing occurring 5,741 times every day in Rome (according to Urbi). These two Italian cities alone account for 2.1 million car-sharing trips per year.

The result is that it has become increasingly commonplace not to have a car: two out of ten car share scheme users have either said goodbye to their own vehicle or decided not to buy one.

This reduction in car ownership is the first sign of a significant ongoing transformation in Italian society, towards a growth model more in line with a service economy.

This shift towards a ‘sharing economy’ has gained momentum over the last few years as a young generation of ‘Millennials’ reject the obsession with car ownership that was dominant with their predecessors the ‘baby boomers’. 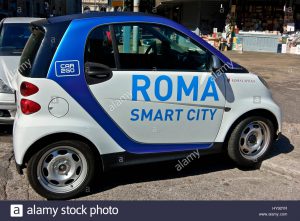 Car sharing is the first choice for a young generation, who grew up in an uneasy economy, are environmentally aware, exercise their eco-consciences and seek satisfaction from shared experience rather than the accumulation of stuff and debt.

According to PricewaterhouseCoopers (PwC), 57 percent of adults agree that access is the new ownership.

Consequently, the boom in the economy of sharing has arrived, not only in transport but also in housing, in designer clothing, food and do-it-yourself (DIY) equipment. If we consider that there will be 2.3 billion Millennials in 2020 (half of the global workforce) we can predict a considerable growth in this phenomenon looking forward. In part, the value chains have already been transformed.

“Platforms for the exchange of goods are probably what Italians are most familiar with; in fact, it is in this sector that some of the first sharing services were born in Italy,” said Marta Mainieri, founder of Collaboriamo.org and author of the annual mapping of the sharing economy in Italy.

During the last mapping, reported in 2016, Collaboriamo.org surveyed 138 sharing platforms on the Italian market (including 27 foreign platforms with offices in Italy), up by 17 percent compared with the previous year.

Besides transport, the area with the highest number of Italian sharing platforms (18) is in exchanging, renting and selling items.

The services that sell used items—such as Bakeka and Subito—are those best known to the general public. However, there are others, such as LocLoc or Useit, which rent out all types of goods, while Sharewood specializes in the sharing of sports equipment.

The largest growth sector, however, is corporate services, in which the platforms have doubled in a year, from 6 to 12; “demonstrating the fact that companies now understand the sharing economy,” said Mainieri.

Two organizations that are very active in this area are the Brodolini Foundation, which is involved in different projects to redefine relations between businesses starting out with circularity and sharing, and the Polytechnic University of Turin with the European project Retrace, which is aimed at smart, sustainable and inclusive design.

The most popular platforms range from those that share work instruments (Toolsharing) to those that offer shared spaces (Sharepro and Co-hive).

ShopShareing and Theshopshare enable retailers to share their shops with manufacturers, artisans, and businesses.

Meanwhile, this sharing logic is even finding followers among traditional companies: for example, DIY giant Leroy Merlin has set up a support network in Italy providing a “construction site exchange,” which comprises of both materials needed for work and the expertise of its staff.

Once the renovation is complete, the beneficiaries must in-turn get involved in a similar initiative in other housing or accommodation facilities, thus creating an ethical support circle.