Disclaimer: I’m a product manager at Uber. This piece represents my views only, and not those of people working on behalf of Uber.

A wave of electric scooters and bikes has been taking over American cities in the past year. People have been dismissing them as toys (which alone should tickle your interest) or a fad. But there’s a lot more to them than that, and I’d go as far as to say that I’m more excited about the potential 20 years impact of micromobility on cities than I am about that of self-driving cars.

Like autonomous vehicles, electric bikes and scooters are an order of magnitude cleaner and safer than human-driven cars. But unlike self-driving cars, they also bring order of magnitude improvements in space and energy efficiency, on top of being very cheap. And we can deploy them today.
Any single one of these improvements would be a game changer in and of itself, the kind that car companies would spend billions to pursue. Bundled together, they’re an innovation like we see only once a century.

I hope we agree that global warming is a Really Big Deal — probably the one biggest issue we’re facing as a civilization. I’m not saying that scooters are a silver bullet for it. But they’re a big part of the solution. Transportation represents 28% of greenhouse gas emissions, and micromobility can shave a big chunk off of that by eating the sub-2 miles trips making up 40% of urban rides (source).
The reason, in short, is that these new modes are electric and super lightweight. Internal combustion engines are only 35% efficient, losing the rest in heat. Then, only 5% of that energy go into moving the passenger — the other 95% move the car.

Compare that to electric scooters, which convert 85% of their energy into movement and weigh around 30lbs, making their overall energy efficiency over 70%.
Again, car companies would kill to improve their cars’ efficiency by 10%. Here, we’re talking of a 4000% improvement.

You may have seen these images highlighting the abysmal space-inefficiency of cars. 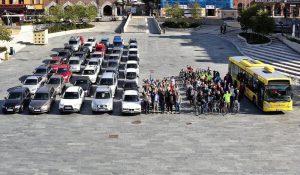 This is what I find hilarious in people complaining about scooters “taking too much space.” It’s a typical case of what Bastiat calls “The Seen and the Unseen.” You see the space the scooter takes, but not that saved by replacing a car. If you care about space, you should love bikes and scooters.
I know, scooters are sometimes in the middle of the sidewalk, and cars aren’t. But that’s easily solvable by building more bike racks and dedicated parking spaces, which cities are starting to do.
These new vehicles don’t save space only by being smaller. They also allow riders to keep a shorter safety distance between each other. By some estimates, these 2 factors combined result in traffic bandwidth that’s up to 10x greater.

This makes micromobility the one most compelling solution to our traffic problems. And to illustrate how big of a problem it is: a 2015 study by the Texas A&M Transportation institute and INRIX finds that (emphasis mine)

In 2014, congestion caused urban Americans to travel an extra 6.9 billion hoursand purchase an extra 3.1 billion gallons of fuel for a congestion cost of $160 billion.

To put these numbers in perspective:

I may already have said it, but this is a very big deal. Solving this traffic problem alone is worth investing dozens of billions of dollars. Talking about micromobility, you find yourself mentioning this kind of perk just in passing, as one of your 5 bullet points.

Now, I know this one may be a bit contentious — I too read the articles about bike fatalities. But here’s how I see the situation: someone’s riding their bike, a car kills them, and people view the bike as the problem.
I brought together this very scientific table to describe the real problem.

If we reserved a whole neighborhood to bikes only, or just built a lot of bike lanes in it, I guarantee the accidents rate would go way down. In fact, The Netherlands ran the experiment. Can you guess from the chart below when it started building bike lanes everywhere?

Source: Statistics Netherlands
Yes, the early 70s, after which road fatalities decreased from 3500+ in 1971 (including 400+ children) to 640 in 2010 (including 12 children). That’s a reduction of 82% in overall fatalities and of 97% in children fatalities (children are overrepresented in road fatalities since drivers can’t see them).
This is why I think that accelerating the adoption of micromobility is more than an exciting business opportunity — it’s a moral imperative. If we can save dozens of thousands of lives every year just by building a ton of bike lanes, what are we waiting for?

I know it’s become cliché in Silicon Valley to say that you’re #ChangingTheWorld. I think one big reason why people roll their eyes when they hear this is that it’s often said by companies working in the “world of bits.” Not that there’s anything wrong with these businesses, I do believe they’re impactful. But they remain these abstract entities “in the cloud,” pictures behind the glass in your pocket.
Transportation companies are different. They’re actually deeply rooted in the real world — in atoms.

Historical pictures from the Amsterdam Archives. Recent ones by Thomas Schlipjer.
These changes are not just aesthetic. They also have a deep impact on local economies — increasing footfall and the revenue of local businesses. This in turn also translates in higher real estate value in these neighborhoods.
(To read more about the impact of micromobility on local economies, check out Lawlor 2014’s “The business case for better streets and places”.)

This impact makes intuitive sense. Cities are about communities. And cars are about isolating you and putting you in your own bubble. Innovation in the car industry consists in making this bubble as thick as possible: better noise isolation, better suspensions, better speakers…
Micromobility vehicles are the contrary. When you ride a scooter, you’re not isolated — you’re in the city. Driving a car is boring — that’s why we’re trying to automate it. Riding a bike is fun — even more so when it’s electric! (It’s hard to convey this to people who’ve never tried it, but the experience of riding a pedal-assist bike truly is exhilarating.)

I find it funny that Americans visit Europe and extol its charming, lively streets, and then go back home to build the same sprawling suburbs where one needs to drive just to go grab breakfast.
This is one common thing disappointing tourists in the US. They expect to see a big metropolis with skyscrapers everywhere, shops open 24/7, and tons of life in the streets. When they arrive, they rapidly find out that there isn’t much Manhattan in the US, apart from, well, Manhattan.
Go to Houston, Denver or Salt Lake City — even their city centers during week-ends are mostly dead. My favorite example of all is Los Angeles, which in John Lennon’s words is just a “parking lot where you can buy a hamburger for the trip to San Francisco.”

Going around American cities as a pedestrian, one feels like a second-class citizen. The cities were visibly designed for cars, with pedestrians a mere afterthought — when they’re lucky to be a thought at all. The absence of visual diversity makes walking boring, of any shade structure unhealthy, and of places to seat painfully clear that one is not supposed to hang around for too long, like giant signs saying “move along, nothing to see!”
Cities used to be living places. Cars turned most of them into dead spaces instead, with tiny islands of life here and there. I find it unbelievable that we’ve come to see this as the only possible option, and exhilarating to contribute in changing this.

5. Micromobility as a force for economic inclusion

People need transportation options to access earning opportunities, mainly located in unaffordable cities. Today, the cheapest option is public transportation. But there remains a “last mile” problem: how is one to access the nearest station when it’s sometimes miles away? Solving this will need an option with much greater traffic density than public transportation, at a much lower price than cars. Micromobility fits the bill perfectly.

This must be why these new modes of transportation are so overwhelmingly popular amongst lower income groups, as suggested by this survey of 7,000 people by Populus Group in their report on micromobility.

When I make these points, people often tell me that that’s all well and good, but could never happen in the US. “American cities were just designed around cars — we’d have to rebuild the whole country to change this!”
But cities like Amsterdam, too, were re-designed for cars in the first half of the 20th Century, leading to a sharp increase in road fatalities and decrease in bike ridership.

This engendered the fierce activism of the “Stop the Child Murder” movement in the 1970s (“Stop Der Kindermoor”). People took the streets, blocked wide arteries with bicycles, and pressured politicians to build more bike lanes.
Politicians eventually folded, and the impact was significant. Bike ridership nearly doubled in just a couple of years, showing that the reason why people stopped biking was not that they didn’t want to (even in a country with as cold and wet a weather as The Netherlands). It’s just that we wouldn’t let them.

It did not take rebuilding the whole city — just building bike lanes, lots and lots of bike lanes. Neither did it take decades for it to start bearing fruits — just a couple of years.
There is no reason why the same change could not happen in the US. The capital is there. The talent is there. And the capacity for change is there. Look at how fast gay marriage became legal — from 0 states supporting it in 2001 to all 50 of them in 2013. Or look at marijuana, which may be getting legal even faster.

If you’d asked people in 2000, who would have thought that these two things would have happened so quickly? I know I wouldn’t. And I think the US will surprise us again, this time in how quickly and drastically it’s going to reshape its cities in the next 20 years.

To read more about micro mobility we recommend you to read this: E-scooter legislation worries bike advocates