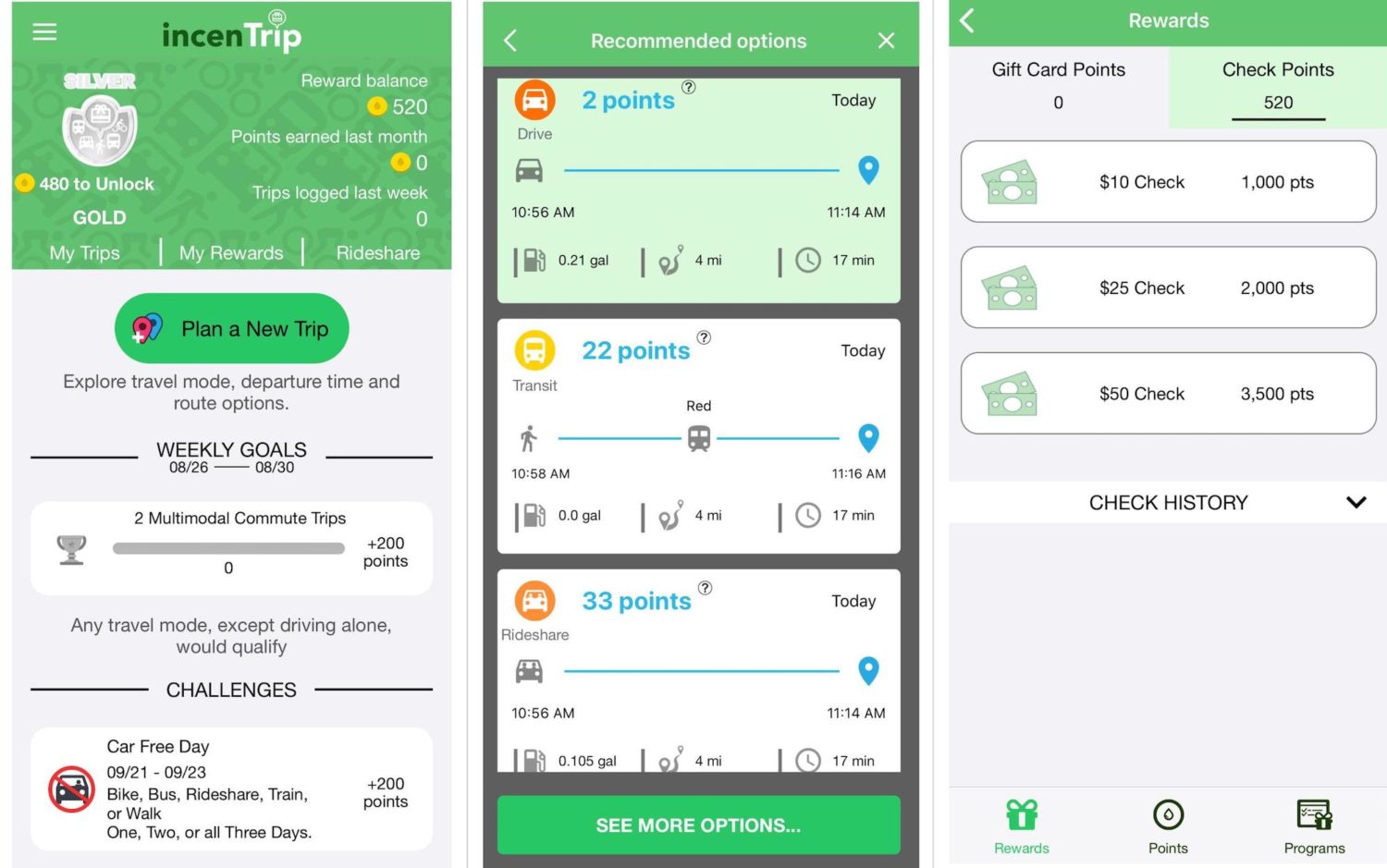 By Jordan Pascale
Would you get out of your car and take public transit for money?
Commuter Connections, a regional government program aimed at reducing congestion and promoting carpooling, is launching an app to do just that.
The app, incenTrip, is now available for commuters across the Washington region after a pilot phase last year garnered 30,000 accounts. The app was developed by the Maryland Transportation Institute at the University of Maryland.
It works like this: Commuters sign up for the app, enter in a destination and the app provides a list of ways to get there. Each mode has a set amount of points you can accrue based on reducing congestion and improving air quality. Transit, biking, walking and ridesharing earn more points than driving.
The app pulls in real-time traffic, weather and work zone information as well as Metro schedules to help commuters make the best choice.
“It basically pulls all of the travel options into one platform and allows you to make choices in terms of what’s best for you during that time of day, and what’s going to work, and then you get rewarded for it,” said Nicholas Ramfos, the head of Commuter Connections at the Metropolitan Washington Council of Governments.
Points vary based on time, distance and mode. The lunchtime Metrorail trip from the incenTrip press conference near Metro Center to WAMU studios in Van Ness earned 41 points, for example. The same trip at 3 p.m. earns only 21 points. Driving earns two points. Ridesharing earns 34 points.
Some points earned during rush hour will go toward a cash reward while other travel will earn gift cards. After earning 1,000 points, users can redeem them for a $10 check or gift card.
“We can’t force behavior change, but we can encourage it and make it more beneficial,” said Marty Nohe, chairman of the Transportation Planning Board and a Prince William County Board of Supervisor.
The program has a pool of $70,000 for the year, but Ramfos said they’d reach out to funding partners if the program is a hit. The money comes from the Virginia, Maryland and D.C. departments of transportation. Individuals can earn up to $600 a year.
Officials say they see spending tax dollars to pay drivers to get off the road is a good return on investment. Nohe said if it moves commuters to rideshare or transit, local governments would save money from wear and tear on the roads.
Lei Zhang heads the institute that created the app at the University of Maryland. He says during the pilot, the institute once achieved a 2% reduction in travel demand, but the impact was far greater — a 27% reduction in peak period traffic.
Ramfos said he hopes the “gamification” of travel makes it appealing for people to use.
“I think there are certain segments of the population that this is going to appeal to,” Ramfos said. “It may not be everyone, but … this is one way to nudge people into varying forms of travel behavior.”
In reality, the app is a tool for the concept “transportation demand management” which aims to inform and incentivize travelers to maximize the efficiency of a transportation system. The concept encourages people to live closer to where they work, walk instead of drive for short trips and use transit instead of driving alone.
“The basis to the app is to use personalized real-time incentives to nudge users to [not drive alone], travel during off peak periods or take less congested routes,” Zhang said.
Drivers will get more points early on in the “hook phase” and then start to taper off as users get accustomed to taking other modes of transportation.
“The goal is to hook people and encourage that mode shift,” Nohe said. “It will save time, cost and fuel.”
The app also has a feature that awards points for more eco-friendly driving. It tracks your braking and acceleration, which decreases fuel efficiency and increases emissions.
Local agencies will have access to a dashboard to show the performance and impact of the app and whether it’s making a difference.