What full autonomy means for the Waymo driver

Extract of the Report prepared by Peter Migdley for the UN – Department of Economics and Social Affairs, Commission on Sustainable Development.

Also called “Public-Use Bicycles” (PUBs), “Bicycle Transit, “Bikesharing” or “Smart Bikes”, bicycle-sharing schems comprise short-term urban bicycle rental schemes that enable bicycles to be picked up at any self-serve bicycle station and returned to any other bicycle station, which makes bicycle-sharing ideal for point-to-point trips. The principle of bicycle-sharing is simple: individuals use bicycle on as “as-needed” basis without the cost and responsibilites of bicycle owership.
Over the past ten years, bicycle-sharing schemes have developed from bein interesting experiments in urban mobility to mainstream public transport options in cities as large and complex as Paris and London. Ten years ago, there were five schemes operating in five countries (Denmark, France, Germany, Italy and Portugal) with a total fleet of 4,000 bicycles. Today there are an estimated 375 bicycles sharing schemes operating in 33 countries in almost every region of the world using around 236,000 bicycles. As can be seen from Figure 1 and 2, the rate of growth in bicycle-sharing schemes and fleets has been very rapid since 2008 and has probably outstripped growth in every other form of urban transport. 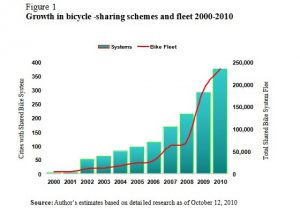 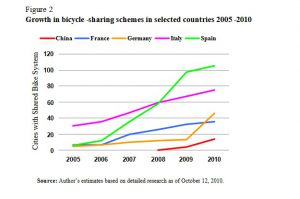 The rapid growth in bicycle-sharing schemes over the past two years outside of Europe, and especially in South East Asia and Latin America, is an indicator of the attractiveness of such systems and their adaptability to different situations. Opportunities for success are clearly evident but from experience with past and current bicycle-sharing schemes, these opportunities will depend on several key factors like bicycles Re-distribution, Ciclyng infrastructure, Maintenance, Network Configuration, Bicycles, Docking Stations, Safety and Security, Weather and Topography, Public Attitudes to Ciclyng, System Accessibility, and System Availability.