The Evolution to a Smart & Sustainable City

By Alex Stuckey
NASA will soon begin testing in Dallas how Uber’s on-demand air-taxi concept would affect crowded areas.
Uber is in the midst of designing an air-taxi service, called, UberAIR. Officials hope to conduct flight demonstrations starting in 2020 and begin commercial operations in Dallas and Los Angeles by 2023.
And on Tuesday, NASA announced that it would help the company “ensure a safe and efficient system for future air transportation in populated areas.”
NASA is excited to be partnering with Uber and others in the community to identify the key challenges facing the (urban air mobility) market, and explore necessary research, development and testing requirements to address those challenges,” Jaiwon Shin, associate administrator for NASA’s Aeronautics Research Mission Directorate, said in a statement.
“Urban air mobility could revolutionize the way people and cargo move in our cities and fundamentally change our lifestyle much like smartphones have.”
Under this agreement, Uber will provide NASA with its plans for implementing the cutting-edge ride-share network and NASA will use computer modeling and simulations to determine the impact of this kind of aircraft.
The simulations will take place at NASA’s research facility at the Dallas Fort Worth International Airport.

NASA personnel will analyze safety issues that could arise from small passenger-carrying aircraft flying through the airport’s airspace during “peak scheduled air traffic,” according to the space agency.
An Uber spokesman said Tuesday that early stages of simulation are already being developed.
NASA could not immediately be reached for comment, but Uber already has been working with the space agency to “develop a specialized air-traffic-control network to keep track of our newly crowded skies” – an agreement that was announced in November, USA Today reported. 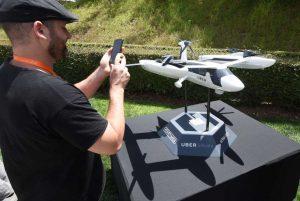 The company is hosting an Uber Elevate Summit in Los Angeles this week and unveiled its air-taxi prototype just ahead of Tuesday’s events.
“On-demand aviation has the potential to radically improve urban mobility, giving people back time lost in their daily commutes,” Uber said in a white paper about the project.

The all-electric aircraft, designed for four passengers, would have vertical take-off and landing capabilities similar to those of a helicopter. It would have four sets of stacked propellers and a cruising speeds of about 150 mph.

Tests of the UberAIR are expected to begin in 2020 in Los Angeles, Dallas, and Dubai, United Arab Emirates, Business Insider reported Tuesday. Once the service is officially launched, passengers would call UberAIR on their smartphones and meet at designated rooftop landing pads, or “skyports,” which could see 200 takeoffs and landings an hour, the article said.
In November, Jeff Holden, Uber’s chief product officer, said the company expects people in Los Angeles will make “heavy use” of the service by the 2028 summer Olympics there.
And the Uber white paper on the project, available at www.uber.com/info/elevate, said the company expects UberAIR to eventually be “an affordable form of daily transportation for the masses, even less expensive than owning a car.”