By Liam Cormicam
An alliance of six Sydney councils has imposed new guidelines on dockless bike sharing companies.
Inner West Council is leading the charge, giving the share bike companies three months to comply or they could face punitive action.

The alliance was formed in November when mayors from Inner West, City of Sydney, Randwick, Waverley, Woollahra and Canada Bay councils met to draft a set of guidelines to address the problem of haphazard placement of share bikes in parks and streets.
Inner West Council mayor Darcy Byrne, who convened the meeting, said it was important that one set of rules was established to protect pedestrian safety and ensure the success of bike share schemes.

Operators will have to introduce “geo-fencing” – a virtual boundary area – for their bikes, a feature that oBike has already launched in Singapore.

Under geo-fencing, users would have to park their bikes in preferred areas or risk a penalty.
A spokeswoman from oBike Australia said it would not be implementing geo-fencing technology “anytime soon as we are still in discussions with the Sydney councils on that”.
CP Lim, the head of oBike Australia, said: “We will abide by [the guidelines] to the best of our abilities within reasonable means.”

A spokesman for Reddy Go said the full implementation of geo-fencing would require “advanced technology and more investment” and there hasn’t been any agreement with the councils on how it would be financed.
Reddy Go said the guidelines are fair and that it would cooperate with councils.
It expects its competitors to also show that the “image of bike sharing in Australia” isn’t diminished.
A spokesman for the City of Sydney said while the council “supports the concept of bike share, we continue to stress our concerns about safety, redistribution of bikes and accessibility on footpaths, and have found operators to be responsive”.
The guidelines state operators must:

Customers are advised to park their share bike in an upright position, kerbside, away from buildings and bike rack spaces, and not on narrow footpaths.
The problem of share bike clutter is well-documented.
Similar guidelines have been introduced in Canberra and in three Melbourne councils.
This came after 30 oBikes were crushed by Melbourne City Council after they were impounded for getting in the way of pedestrians. 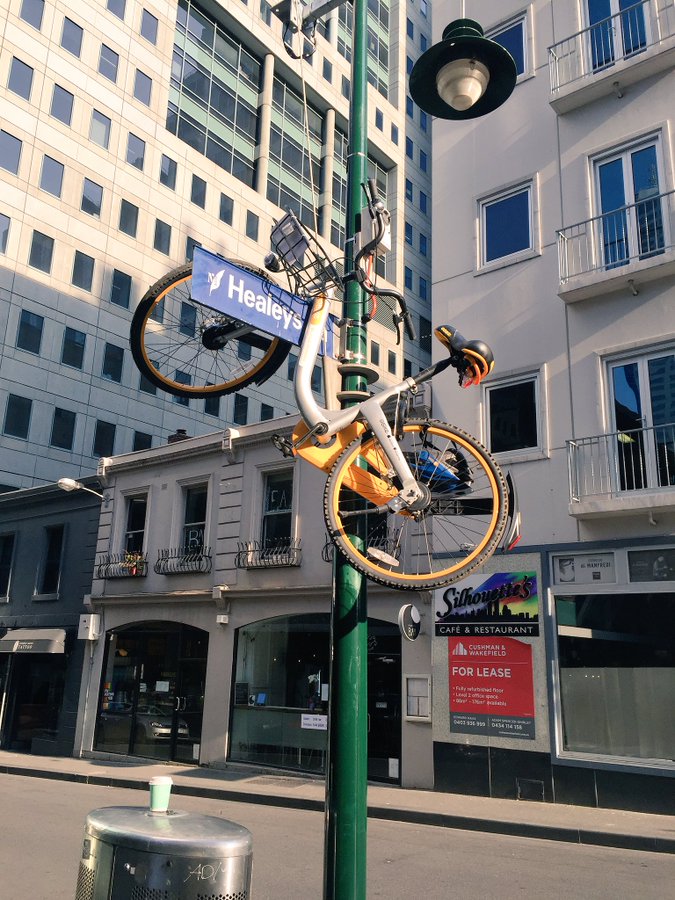 Other Sydney councils are considering their positions.

A spokeswoman from Ryde said that while the number of complaints from residents has increased in relation to share bikes being left in places like parks, they are working with the companies to address the issue.
Willoughby Council has not received any noticeable increase in complaints associated with dockless bikes and there are no shortfalls in the legislation stopping councils from impounding abandoned bikes.
North Sydney mayor Jilly Gibson said it was good for councils to work together but the issue isn’t really on her radar.
“I think we need to not overreact and throw the baby out with the bathwater,” she said.
While she agrees standard council guidelines should be in place, she said: “We need to massage and direct these dockless bikes into something worthwhile like the system they have in Paris.”