BY LANCE MURRAY
Earlier this month, the Arlington City Council voted to end the route, and replace it with the ridesharing service Via beginning Dec. 11.
D Magazine said Arlington will become the first U.S. city to convert its entire mass transit operation into so-called micro transit.
Arlington long has fought the distinction of being the largest U.S. city — a population of roughly 393,000 — without a public mass transit system. The Metro Arlington Express single bus route system was supposed to change that, but it never drew many riders.
The city hopes its subsidized one-year pilot project with Via will have better results.

Via riders will pay a $3 flat rate and will need to use the Via app to summon a shuttle.

Via will operate up to 10 vans with room for six passengers each that run from 7 a.m. to 9 p.m. six days a week, D Magazine reported.
To summon the shared-ride shuttle, riders will need to use the Via app and pay a $3 flat rate for each trip within the service area — the TRE rail station near Dallas Fort Worth International Airport, downtown Arlington, Texas Health Arlington Memorial Hospital, and entertainment options in the east-central area of Arlington.
Later, the service area will expand to include the Parks Mall and the University of Texas at Arlington.

VIA BE LONE MASS TRANSIT OPTION

It’s a bet the city is making that residents will prefer this to buses and trains, and that they will chose Via over Lyft or Uber. 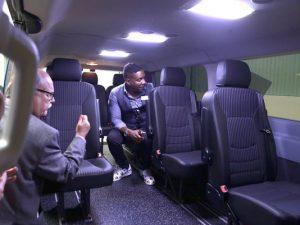 For now, Via would be Arlington’s only mass transit option.
Earlier this year, however, an outfit called the Alliance for Transportation Innovation showed off a self-driving electric trolley system in the city.
Called EasyMile, the shuttle has a top speed of 25 miles per hour. The Alliance has been traveling the country showing off the $250,000, six-seat vehicles that are supposed to have a capacity of 12 people.